Yep- Mom definitely has her hand in this project!.

I needed to get some blue wallpaper for the second floor bedroom (along with the needed wallpaper mucilage mentioned last week) so I turned to www.miniatures.com for some cheap stuff. Their package of 12 assorted papers - 3 each of 4 designs - was cheaper than buying one specific design. I didn't really care what I got, just needed it blue. 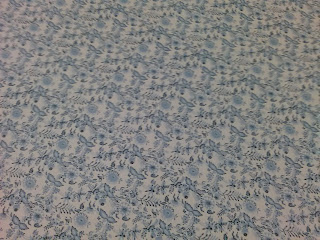 Mom apparently DID care. (For those who may not know, this project is in honor of my mom who passed away Dec. 2, 2011) What a shock when I opened the wallpaper package. BLUE ONION!!!! My mother had a "thing" for blue onion. She had at least 15 place settings of blue onion dinnerware. At one point in her life, all her kitchen accessories were Blue Onion. She even covered her cookbooks and recipe box in Blue Onion contact paper. So - it seems fitting that the bedroom in the Hoarder House will be papered in Blue Onion.


I finished papering and trimming the rooms on the first and second floor. What a chore!! Paper buckled, ripped and got cut poorly. Making this a Hoarder House was a great idea. I can't imagine how I would have papered it otherwise. I even split some of the trim - looks great! Almost like I distressed it on purpose :)

In memory of the passing of miniature brick-and-mortar shops.


What do you do when you run out of glue? Answer: Find another project! And mourn the passing of our brick and mortar shops.

The inevitable happened this weekend. I ran out of the wallpaper mucilage I use. Yes, I suppose I could have tried a different product. But I didn't want to. I like what I was using: MiniGraphics Wallpaper Mucilage.

I knew A.C. Moore had a small dollhouse section, so I headed out, hoping to purchase some there. No luck. They only carry a small selection of furniture, some Classics brand building components, some random carpets, along with a few accessory items.

When Mom and I began actively pursuing our mini hobby, we had several choices of shops in the New Haven, CT area. I think it was maybe the late 1970's - early 1980's.

Our favorite was "The Crafty Owl" in North Haven run by Hazel Smith. Hazel was a teacher who ran the shop outside of her work hours. She also had a fun dollhouse "museum" in a separate room, that you could enter for the "huge" fee of 25 cents!! After a number of years running the store out of the first floor of an old home, Hazel moved her shop to a standalone shop on the main drag in North Haven. Hazel also ran the twice yearly doll shows at the New Haven Motor Inn. At some point, the date of which I can't remember, she retired, then, sadly passed away. I think her daughter, Florence had briefly considered carrying on her mother's work but she moved away (Pennsylvania?) and I lost touch. I often wonder what happened to Hazel's wonderful collection.

In those days, one had the choice of decorating in the Victorian style or the Colonial style. That was about it. Another local miniaturist Beverly Finley, owned Colonial Pine Miniatures. She had a little shop in her house, which was an original colonial salt-box home in Hamden. She also ran an annual dollhouse show.

Mom bought me a present when I earned my Master;s degree: a 3 story townhouse, purchased from a small shop on Route 10 in Cheshire - can't remember the name. I spent tons of money purchasing beautiful resin windows and doors created by Derek Perkins for that house from Paul Lawson (hope I remembered the name correctly) who ran Miniature Mansions out of a small shop off Whalley Avenue in New Haven. That was 1985. Still haven't installed those windows!

Then there was Roberta Glidden. Roberta ran local shows and opened shop in several locations: her home in Cheshire, a shop in the Watch Factory Mall in Cheshire and lastly a shop on Rt. 68 (I think!) in Cheshire, near Southington. Roberta usually held one of her shows the first week in March. As Mom's birthday was March 5th, we attended every year as part of her birthday celebration. One year, the show was on Mom's actual birthday! At that show she won one of her prized possessions: a British baby carriage.


In Stratford, there was a shop owned by a funny woman who smoked a lot. It was later purchased by a man who wanted to keep the shop going - very commendable. Unfortunately, it didn't last long.

In North Haven, we could also buy supplies at Hubie's Hobbies.

The last shop I frequented was Mirabella Miniatures in Fairfield. The owner had to close her shop due to health concerns.

There were other miniature shops in CT, of course, but these were the ones I frequented. I remember a shop in Seymour, one in Brookfield, and Molly Brody's in Stamford.

Writing this, I am thinking someone should do a "History of Miniature Shopping in CT" Any volunteers?

Oh, BTW - I ordered the wallpaper mucilage online. Should be here later this week.
Posted by dholman472 at 7:50 PM No comments:

I've really stuck to my timeline....very impressed with myself. My plan was to do something on the Hoarder House EVERY week so that I could publish a new post each week. So far, so good!

My fabulous daughter Caitlin, is home this weekend. She's off visiting friends, so I took the opportunity to wallpaper a few rooms.

The picture below is the second floor hallway. Considering all the doorways and the trim, this was easier than I expected it to be. 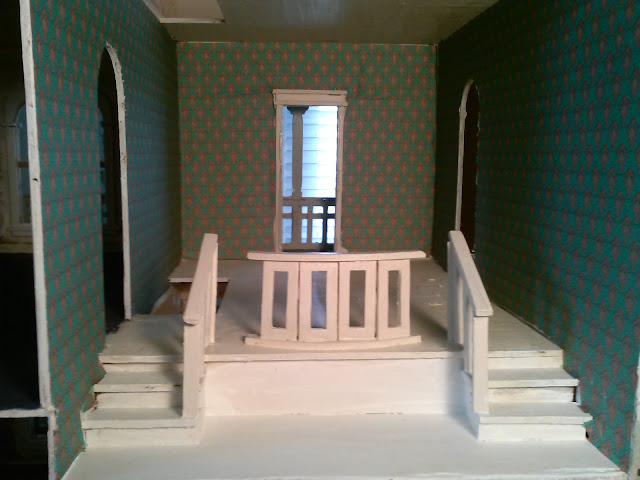 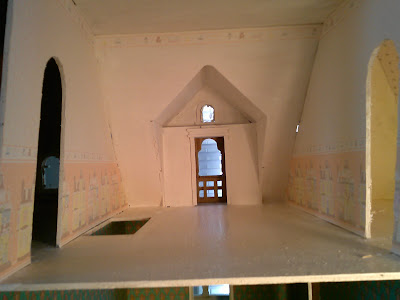 The room to the right is papered with a dollhouse-themed paper that Meghan picked out years ago.

This will become the "CRAFT ROOM".


On to the bathroom:
The paper is really adorable - created by "Itsy Bitsy Mini", it has a cute bath signs border. 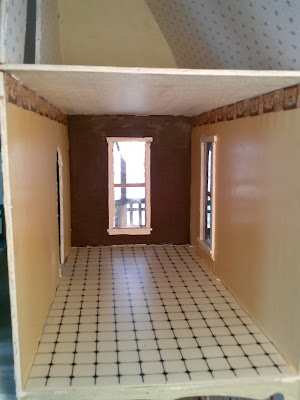 Oops! Didn't buy enough paper for the bathroom :(
Like Mom, I don't cope well with delays. I want it done NOW! Solution: Paint the back wall.

New Problem: Don't have yellow paint.
New Solution: Paint the wall an accent color! I chose brown......'cause that's what I had available!!

Actually, I think it turned out quite well.

The bathroom was very difficult to paper. The room is quite narrow and it was tough to maneuver the craft knife around the window and door trims. I made a few boo-boos.

Very thankful I don't have to be perfect in this house!! 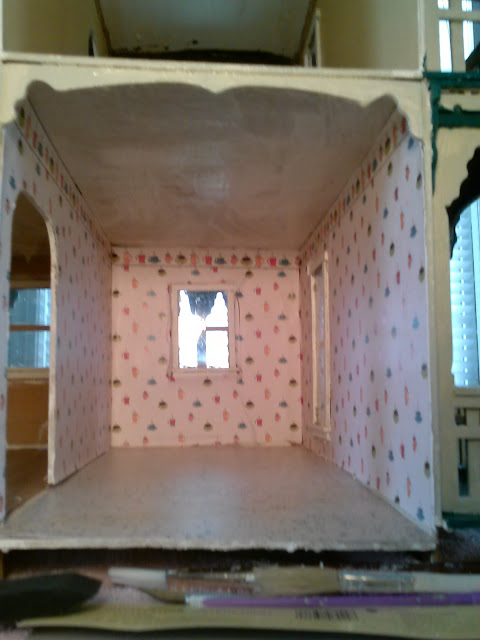 Also from "Itsy Bitsy Mini" is the kitchen paper. I am very impressed with the quality of their papers. Much heavier than typical dollhouse papers and fabulous designs! Below is a closeup of the border design. 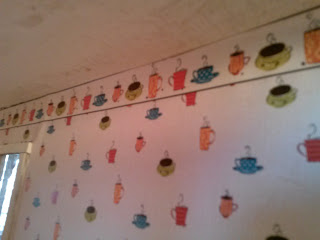 This room was also tough to paper. Seriously.  I'll create some cute curtains to hide some of the errors I made around the window trim.

Several years ago I went to Jane Haskell's estate sale. Jane was a talented miniaturist and lived in Connecticut. I attended her estate sale and purchased a number of treasures. One thing I bought was a set of kitchen appliances perfectly suited for a Hoarder House. The pieces are signed "Rita '92".  I don't know who Rita is but I plan to post a message on CAMP to try and find out. (CAMP is the greatest Yahoo group ever!! The group's members are all dollhouse miniaturists. Some are just regular people like me. Others are extremely talented professional artisans. The group is open to anyone with an interest in dollhouse miniatures....and a sense of humor!! If you'd like more info, just email me!)

Anyway...I had no idea what I would do with the set at the time, but I just couldn't leave them there. So glad I didn't!!! Here is a sneak peek at the pieces. 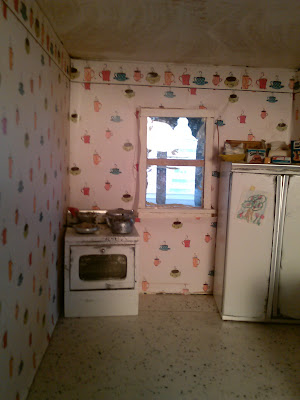 To the left are the stove and refrigerator.
In a later post, you will be able to see the insides. A hoarder's dream!!

Can't wait to find out who "Rita '92" is. She's obviously a very talented lady!

To the right is the kitchen sink.
You also can see the mess on top of the fridge pretty well in this shot.

Below is a pic of the opened kitchen sink. Rita didn't forget a thing!!
I love the messed up pipes and the red pail. 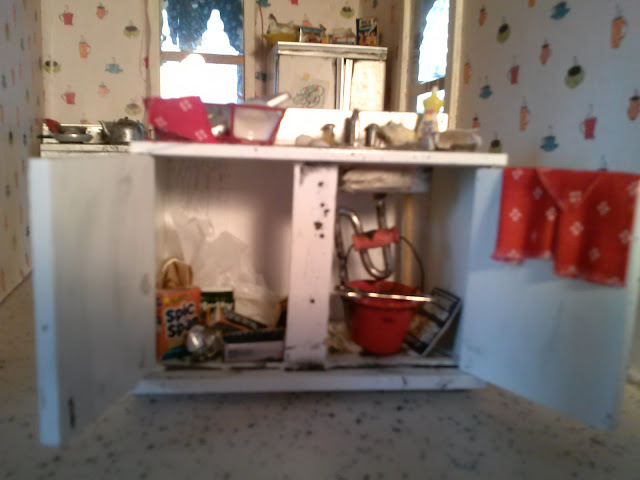 That's it for this week. I ran out of wallpaper mucilage, so until I get a new jar, I'll be focusing on painting and installing trim.
Posted by dholman472 at 5:04 PM No comments:

I had planned to spend the day in my raggedy sweats, doing laundry and wallpapering the Hoarder House. I did finish the laundry.....and I did paint the walls with a base coat. But...then....YAY! My friend, Doreen called and I decided to spend some time with her and went out to lunch.

In my defense, I did accomplish most of what I set out to do. I wasn't going to paint, but I know the wood is extremely dry on the house and I thought it best to put a sloppy base coat on to prevent the wallpaper mucilage from simply seeping into the walls. 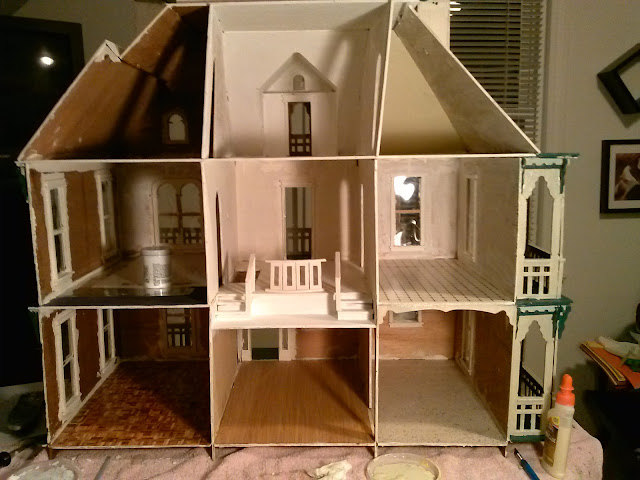 I only painted the rooms where I'm going to use light-colored paper. Even though I probably should paint all the walls, I just don't feel like it! Let's pretend I'm testing the glue vs. dry wood theory.

It's definitely going to be a challenge papering around the windows and doors. I've already decided to use drapery to cover up the few wood frames that were put in backwards, preventing me from painting them. Since the plastic is over the window frames raw wood is showing towards the room. I could pull out the windows but I think I'd make a bigger mess trying to fix them. As my mom used to say, "That's what curtains are for." Since it's her "fault" the windows are in backwards it's only fitting to use her solution to a messy house. She would draw her drapes and keep the lights low so as not to see whatever needed cleaning.

Going through the wallpaper stash 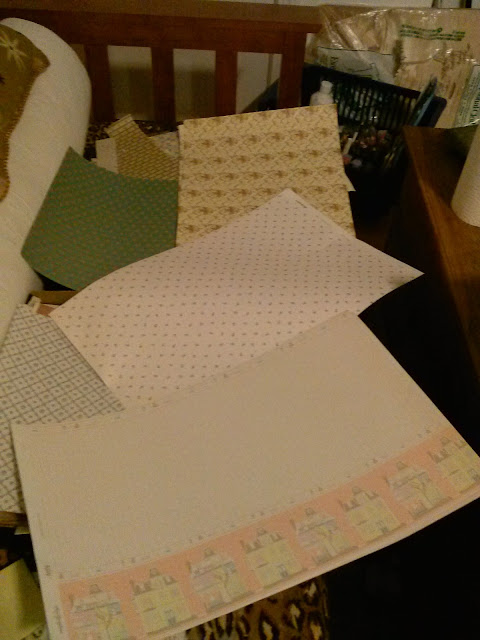 I found several good choices in my stash. Some, like the dollhouse paper above, were chosen by the girls many years ago. I decided to look in the Hobby Builders Supply catalog just for kicks (www.miniatures.com) and found some inspiration. I chose a few designs that Mom really would have liked in her own home. I should have those by next week.